History of Focusing in Ireland

What I had been looking for - Kathleen Kavanagh and Mairead O'Brien: thirty years of practising and teaching Focusing.

Irish pioneers of Focusing include Kathleen Kavanagh and Mairead O'Brien*, who brought the benefits of Focusing to people in business and education and to asylum-seekers among many others. In addition they trained many Focusing teachers. In these edited extracts from an article in the TIFI Newsletter (2003) they tell Ellen Kirschner about their Focusing journey:

"I came to appreciate Focusing during a retreat in Prince Edward Island, Canada, in 1990," said Kathleen. "It was a time when I was lost enough to find myself."

Kathleen read Bio-Spirituality: Focusing as a Way to Grow, by Peter Campbell and Edwin McMahon, finding words for what she already knew from the inside.

"The experience was really confirming and brought me to a deep place inside myself," she continued, "beyond the constraints of any existing culture, to discover what we human beings have in common. The body consciousness this experience pointed to became for me a way of spiritual knowing."

After participating in introductory workshops given by Mary McGuire and Ann Weiser Cornell in the UK, Kathleen went to Chicago to complete the Certification Training program, where she met Eugene Gendlin. She later introduced Focusing to Mairead O'Brien. The two had originally met in 1958 while both were on the staff of the Teacher Training College, Aba, Nigeria, West Africa where they worked as missionary sisters.

"What I had been looking for"

"I came to Focusing later in life," said Mairead, "after a long career in education, spirituality and alternative therapies. In Focusing I found what I had been looking for all along - a way to accompany myself in an inner mode, especially in a sad space. Focusing gave me the confidence that no matter what was evoked inside me I would have a way to be with it, and would know from the inside how to move forward."

Mairead grew up amid a magical Irish landscape of limestone beaches stretching toward the ocean dotted with tombs and crosses - evidence of its ancient inhabitants. While the setting had always provided a rich spiritual dimension for her, it was Focusing that gave her a way to realise its full meaning in her life, imparting, in Gendlin's words, " a sense of being bodily alive in a vast system." She completed her Certification Training in Chicago in 1995.

"I had the sense of breaking through many boundaries at once," she said, "experiencing firsthand the true meaning of the Biblical phrase, 'widening the space of your tent.'"

Kathleen and Mairead began teaching Focusing in Ireland to people from every walk of life and, together with Anne Kelly and Greg Madison, developed a teacher-training programme. They have trained more than 40 teachers.

The Irish Focusing Teachers' Association (IFTA) produced a biannual newsletter, Focusing in Ireland. In 2001 it hosted the International Conference (you can read some of these newsletters on our resources page). Over the years the IFTA has sponsored workshops by many international teachers. "Against that backdrop," said Kathleen, "we evolved our own way of teaching Focusing." Among the variety of settings including business and education, Kathleen also taught focusing to asylum seekers. 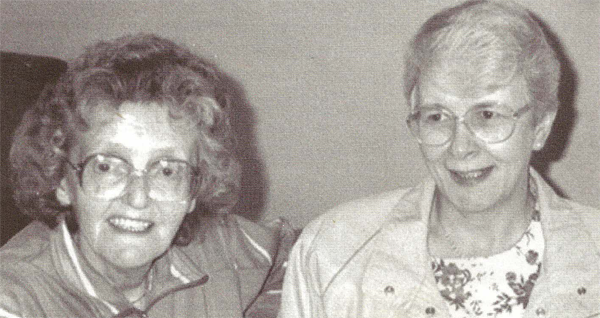 Considering the religious and political strife in Ireland, the benefit of Focusing with its ethos of valuing unity within diversity, has had particular importance. The techniques of Interactive Focusing developed by Mary McGuire and Janet Klein have been especially useful. Mairead's article, "Justice and Peace: The Inner Dimension," published in the Education for Justice Committee newsletter, was well received. "Focusing helps us live from a deeper place than just our thoughts and feelings," said Kathleen, "deepening our access to transpersonal experience, letting us feel connected within a larger context. In our work it is a powerful promoter of spiritual growth."

*RIP, Sadly Mairead passed in 2015 and is much missed by the Focusing community.

During the lockdowns in 2020 and 2021 the Irish Focusing Network emerged and grew through Zoom with our weekly Focusing gatherings. Our new website was launched in June 2021.